Ok, so I have never found a wonderland book that I could read that wasn’t full of voo-doo or something inappropriate in it. But then I saw this book and was immediately interested! So I showed my mom, she looked at it read a little and said it was clean so I bought it then and there! And I’m glad I did.

This book is about Wonderland. But a version of Wonderland you’ve never read before… Set in a steampunk world, Alice and her crew are trying to stop the evil Queen of Hearts by capturing her most evil weapon yet. A half-human half-robot killing machine that the Queen’s twisted doctor created. But when they find it, they discover a man under all the machine and a heart trying to turn towards good. When Alice sees his heart, she knows there is something bigger going on and something only her crew of misfits can stop!

This book was AMAZING!!!!! I have already re-read it 3 times and I haven’t even had it a whole month! This author took a world of magic and brought it to a world of steampunk to make a completely new book! There is romance, action, suspense, adventure, battles, mystery all tangled into a hands down amazing book perfect for 16 and up teens. And there is even some mention of God in the book.

Now, there is violence in the book. (This is Wonderland) Nothing is grossly described but people die, get stabbed, shot, off with a head or 2. There is mention of kids being taken into the Queen’s army and not making it. The monster has killed people too, and he almost takes off someones head by twisting it. (Nothing described just bruising) So it is not kid-friendly.

Over all, I LOVE IT! I adore this book and can not wait for more! (I hope there’s more!!!!!) I totally suggest it! -The Young Llama Reader. 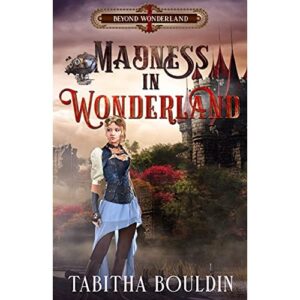 Wonderland is in trouble.

Under the rule of the Red Queen, Wonderland is under constant threat. In fear for her throne, children are taken into the queen’s army and only the strongest survive.

Alice is nothing but a pirate, but with the help of Hatter, they hatch a plan to sneak into the Red Queen’s palace to free Hatter’s sister. After all, Alice has always wanted to fly an airship.

Dr. Frank N. Stein has created an army of automatons to serve their queen. Of particular note: a prototype soldier. Part man. Part machine. The best of both worlds.

Doc’s monster is a threat to everything they know, but Alice sees something in the man that begs she look beyond what he’s done and search out the heart of the beast for the better of the realm.

He’s their only hope of survival, but how can a monster learn to love when all he’s known is hate?

Let us know if you liked the post. That’s the only way we can improve.
Tags: Adventure, Christian, Dark Topics, Funny, Romance, Violence