Ok, so I read the Millie Maven series from this author and I kind-of liked that book but it felt a bit dark. So, I tried the other series Ted Dekker wrote for young boys. And it is also kind-of dark but still adventurous, interesting and Christian-friendly.

This series is about the last of the human race living in space as they wait for the nuclear toxic on earth to clear. But when it does they are in for a surprise. A big, scaly, fire-breathing surprise. Yep Dragons have woken up and taken over earth. And worse than that the air on earth is now even more toxic with dragons breath that can kill an adult… but not a kid. So Jack and his team are sent down to kill off the dragon queen and re-claim earth, but they are in for a surprise…

So, the book was good, clean, had a nice plot line and such. But there is violence and death… a lot of death. I think Ted Dekker just writes darker books than most Christian authors. So if you aren’t ok with people dying, disappearing, falling off cliffs, getting hurt, poisoned and more! Than this book isn’t for you.

And there is also a weird part of the book. People in the book drink “Dragon Milk” from the queen through out the series and it heals them/controls them. (Anyone remembering the worm sludge from the Millie Maven series?) It’s like temptation of sin in the book and it magically connects them to the dragons…. Weird right?

Over all, the book is clean and good for kids, it just feels a bit darker than I like. I think this book could be read by a 9 and up kid, and I think they would enjoy it too. I just don’t like the darker books. See ya! -The Young Llama Reader. 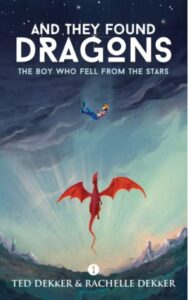 It has been written that there is no fear in love and that perfect love casts out all fear. Welcome to an age in the not-so-distant future in which fear has personified itself as dragons whose wrath can only be avoided through loyalty. The light of Love is a distant relic. Into this world comes a twelve-year-old boy named Jack who has heard the ancient teachings of Yeshua which claim that only love can cast out fear. But if young Jack is to discover this way of love and bring light into the darkness, he will face many perils. Only through grasping the power of love over fear can the children of the world find themselves in the grace and peace promised so long ago. And They Found Dragons is one of those rare stories that, although written for Middle-Grade readers ages 9 and up, will touch the hearts of adults as deeply. Join us in a thrilling ride that will forever change the way readers confront the challenges all encounter in their journey through this life. A must-read for all ages.

Let us know if you liked the post. That’s the only way we can improve.
Tags: Adventure, Books for Boys, Christian, Dark Topics, Kid-Friendly, Magic Alert, Part of a Series, Violence