This book is set in 2223 and Liam and Phoebe are waking up from hyper sleep hoping to be closer to the rest of humanity but couldn’t be father away. Earth has been gone for years and now Mars is destroyed as well. And it seems to be that there is someone out there destroying galaxies and aliens bent on finishing off the rest of the humans who are on their way to their new home. But with dark secrets, evil aliens, time-traveling and a war beginning to brew, will Liam and Phoebe be able to save what’s left of their future home?

This book was filled with adventure, action and aliens that make me want to drop Star Wars and obsessive over this series instead! However, with every sci-fi book there will be some version of violence. (It’s like space is trying to kill us or something!!!!) People get shot, frozen in space, and some people get surgeries and extra hearts to help them stay alive and finish their mission. And SPOILER! (Though this happens in the first chapter, all life on a planet get wiped out by a nuclear missiles. Only 200-something people survive and it does describe the fear and destruction that happened…) SPOILER OVER! Other than the violence, and I believe only 1 curse word, this book is fantastic for kids!

Over all, this is one series that I adore (except for book 3 but I will get to that later) and I totally suggest this book to those who love a good time-traveling sci-fi! Have an amazing day! -The Young Llama Reader. 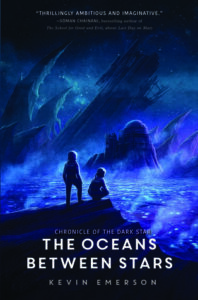 It is Earth year 2223, but the Earth, along with the entire solar system, is gone.

Liam and Phoebe, having barely escaped our exploding sun with their lives, are in stasis for the decade-long journey to the rogue planet Delphi, where they hope to meet up with the rest of the human refugees, find help for their injured parents, and pass along the devastating things they discovered on Mars: that someone destroyed their world intentionally, and that that someone might still be after them, trying to finish the job.

Phoebe is carrying her own dark secret. One that finds her waking up secretly at various points in their journey, changing their path through space. One that will decide the fate of the human race, and many more besides. One that, very soon, she must reveal to Liam, whether he’s ready for the truth or not.

The second volume in Kevin Emerson’s thrilling sci-fi epic is a bold and terrifying quest into the outer reaches of time and space—one that will change our heroes, and their friendship, forever.

Let us know if you liked the post. That’s the only way we can improve.
Tags: Adventure, Books for Boys, Curse Words, Dark Topics, Funny, Kid-Friendly, Part of a Series, Romance, Sci-Fi, Violence