Ok, so I love any Atlantis story, especially adventure ones! But… I accidentally bought this book before I saw that the author wrote a lot of books involving weird magic and now I can’t find the receipt!

This book is about a girl and her cousin getting shipwrecked on the island of Atlantis. But it is not like myths at all! With deadly creatures, people turning into animals, gargoyles, mean unicorns, creepy mermaids and a man-eating leviathan!… Will they be able to escape, or will they die trying?

So, before I dive into the book I would just like to say for the record there isn’t any voo-doo or magic like that, but the book had this dark side with no humor wrapped around the magic that I didn’t like. The giant sea creature trying to eat people didn’t bother me, nor did the people being turned into animals because of Atlantis’ magic. It was the creepy way the animal-people wanted to hunt down humans and how their faces were stretched wrong while their mouths filled with sharp teeth. And the way the entire book didn’t make me laugh once… It was kind-of dark? And their was no happiness or joy in the story. Just depression and violence, blood and death.

Soooo… Over all, I will be avoiding this author and I don’t suggest this book. I need to go find the receipt and read a happier story! Bye. -The Young Llama Reader. 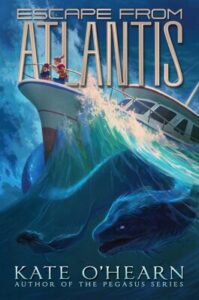 The last way that Riley Evans wanted to spend spring break was studying whales on the family sailboat in the middle of the Bermuda Triangle. With only her dad, aunt, and annoying cousin Alfie for company, she is so bored staring at the waves that she’s starting to see mermaids between them. But when their boat is capsized during a sudden storm, Riley finds more excitement than she bargained for as she and Alfie are washed ashore with neither of their parents in sight. Where they’ve been shipwrecked is no deserted island, though.

Atlantis is a place beyond imagination, inhabited by both people and incredible creatures ranging from unicorns and gargoyles to talking animals. But not everyone welcomes the cousins’ arrival, and beneath the wonder of this mythical land lurk dangerous secrets—something strange is happening to the inhabitants. What Riley wants more than anything is to find her father and go home. But the closer she gets to this goal, the more the islanders seem determined to keep her from reaching it.

As Riley and Alfie unravel the mystery of Atlantis and its most terrifying part, the Forbidden Zone, they realize that the clock is ticking. If they can’t learn what happened to their parents and find a way off the island soon, it may be too late to leave.

Let us know if you liked the post. That’s the only way we can improve.
Tags: Adventure, Dark Topics, Magic Alert, Part of a Series, Violence