Ok, I think I tried to read this book a few years ago and I guess I thought it was boring cause I didn’t read it… What was I thinking!?!?! This book is amazing! Amazing/terrifying but amazing!

This book is about a boy who lives on Mars with the rest of the human race. Based way in the future when Earth was burned to a crisp by the sun, humanity now lives on Mars but are planning to move across the galaxy to a safer planet before Mars is also burned up. But with 3 years left before this planet is also inhabitable, problems start accruing when they are getting ready to leave. And only Liam and his friend can save them. With aliens, unknown technology and a whole lot of luck, maybe humanity can make it?

This book was awesome! I will admit reading about Earth being burned up was scary but it will happen one day! (Just read Revelation in the Bible. It will REALLY open your eyes) Anyways, this book was soooo interesting I could NOT put it down! There was action, mystery, spacey technology and more! This book is great for those Sci-fi lovers out there, and is also clean for kids!

However, there is violence, death, mention of aliens maybe killing people, and more than 1 planets burn up and kill all life on them… So yes, violence is in there. But it isn’t graphic, though people do get burned, shot, and frozen in space. (Only mentioned though) The book is still very clean with all that mentioned. I wouldn’t say it’s 8 and up. Maybe more 10 and up for both girls and boys.

Over all, I LOVE IT!!!!! I am already reading book 2 and 3 and can not wait to review them! (Also yes I’m back from break and nailed my finals) Love you all! -The Young Llama Reader. 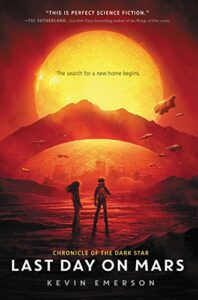 It is Earth year 2213—but, of course, there is no Earth anymore. Not since it was burned to a cinder by the sun, which has mysteriously begun the process of going supernova. The human race has fled to Mars, but this was only a temporary solution while we have prepared for a second trip: a one-hundred-fifty-year journey to a distant star, our best guess at where we might find a new home.

Liam Saunders-Chang is one of the last humans left on Mars. The son of two scientists who have been racing against time to create technology vital to humanity’s survival, Liam, along with his friend Phoebe, will be on the last starliner to depart before Mars, like Earth before it, is destroyed.

Or so he thinks. Because before this day is over, Liam and Phoebe will make a series of profound discoveries about the nature of time and space and find out that the human race is just one of many in our universe locked in a dangerous struggle for survival.

Let us know if you liked the post. That’s the only way we can improve.
Tags: Adventure, Books for Boys, Curse Words, Dark Topics, Kid-Friendly, Part of a Series, Romance, Sci-Fi, Violence