So let me start by saying, I did not mean to read book 2 first… But I did per-usual… And then I had to go buy book 1 to review first cause I love you all. (Your Welcome!!!) And I really enjoyed this book, but I was torn on some of the Beasts in the book. So I will leave it up to you to decide if it’s for you or not!

This book is about a boy who lives in a village that has many different (strange) rules. He is an orphan and really tries to follow his village’s way but somehow always mess’ up. Though he never broke the rule about going into the Woods that is filled with evil Beasts of Lore that will eat you!.. Until he did, and accidentally bonded with one. Now he is kicked out of his village and thrust into a world of strange people who bond with the strange Beasts, and have strange powers… And he is one of them. And the only way to get rid of his mark is to win an apprentice exam that could kill him and his new Beast… Fun right?

So, I loved this book! It was soooo much fun to read and I loved the way the author wrote this world! There’s adventure, fighting, good guys winning, bad guys trying to destroy the world! However, there is magic in the book may people will freak out at. It’s called ‘Lore’ in the book, and is a lot like the magic in Disney’s Moana. I’m not kidding, the people who bond with the Beasts in the book get a Mark-like-tattoo where their creature can rest. And when they bond with a creature they get powers like wind, water, or shadow. It isn’t voodoo or dark magic, the Lore is all very clean and kid friendly. My issue was some of the Beasts.

There are a few Beast that are just plain weird. Made up of bones with glowing “eyes” that stand on their hind legs but are animals… Plus, (SPOILERS) If someone breaks a bond with a Beast it may turn the person into the creature. Scales, fun and horns will appear on the person and change them… Which is very creepy to read about.

Over all, this is a clean book with just a few creepy animals. But the Wingfeather saga had their own creepyiness why can’t this book! Anyways, I hope you all have a great day. -The Young Llama Reader. 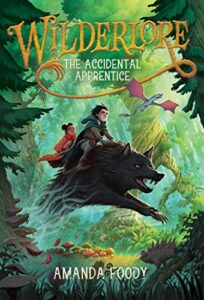 The last thing Barclay Thorne ever wanted was an adventure.

Thankfully, as an apprentice to the town’s mushroom farmer, Barclay need only work hard and follow the rules to one day become the head mushroom farmer himself. No danger required. But then Barclay accidentally breaks his town’s most sacred rule: never ever EVER stray into the Woods, for within the Woods lurk vicious magical Beasts.

To Barclay’s horror, he faces a fate far worse than being eaten: he unwittingly bonds with a Beast and is run out of town by an angry mob. Determined to break this bond and return home, Barclay journeys to find the mysterious town of Lore Keepers, people who have also bonded with Beasts and share their powers.

But after making new friends, entering a dangerous apprenticeship exam, and even facing the legendary Beast of the Woods, Barclay must make a difficult choice: return to the home and rules he’s always known, or embrace the adventure awaiting him.

Let us know if you liked the post. That’s the only way we can improve.
Tags: Adventure, Books for Boys, Dark Topics, Funny, Magic Alert, Part of a Series, Violence